On Wednesday, December 5, Senator Mark Schoesler and representative Mary Dye came to the Foley to update their constituents about the upcoming legislative session in Olympia.

On Thursday, November 29, Bob Ferguson, attorney general of the state of Washington returned to The Foley Institute to share an update on his office’s work. Ferguson began his talk by providing an overview of the process his team follows to determine if they will fire any given lawsuit and cited his team’s 15-0 record in lawsuits against the Trump administration.

Ferguson then summarized two ongoing lawsuits in which his office is currently engaged. The first focuses on 3D printing of guns and the potential constitutional violations associated with this practice. Ferguson explained his team’s process of acquiring a restraining order to cease this business practice. The second lawsuit that Ferguson discussed, filed by Maryland and supported by Washington, centers on the appointment of Matthew Whitaker as acting Attorney General. Ferguson questioned the legitimacy of this appointment on the grounds that Whitaker did not follow constitutional procedure in receiving a Senate confirmation. Following his talk, Ferguson answered questions on a range of topics including the transgender military ban, the Oso mudslide, and his office’s priorities.

Coffee and Politics: Making sense of the midterm election results 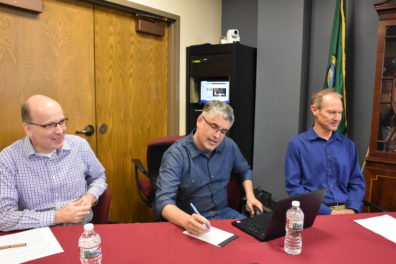 On Wednesday November 7, the Foley Institute hosted Travis Ridout and Mark Stephan from Washington State University’s School of Politics, Philosophy, and Public Affairs, and John Wilkerson from the University of Washington. Each speaker presented their analyses of the 2018 midterm elections. Wilkerson discussed how his findings showed Justice Kavanaugh’s investigative hearing had a larger effect in Senate races than House races. Ridout and Stephan discussed their analyses of President Trump’s effect on the Republican party during the 2016 and 2018 elections.

Collectively, the speakers agreed polling data generally predicted the results accurately and that it will lead to more partisan gerrymandering and redistricting.

On Tuesday October 30, the Foley Institute hosted former members of Congress Bob Inglis (R) and Bryan Baird (D) to discuss their collaboration on bipartisan solutions to climate change. Inglis discussed his experience as a conservative believing in climate change and shared his perspective on how to approach the issue in a manner that conservatives could agree with.

Together, the former congressional representatives introduced and continue to support a carbon tax bill, intended to promote market competitiveness in producing alternative, cleaner forms of energy. They concluded their talk by encouraging all attendees to share what they had learnt with friends and family, emphasizing the importance of public opinion in making progress on climate change.

Media and Politics: Targeting you! Micro-targeting in elections

On Thursday, October 25, Shannon McGregor, Travis Ridout, and Emily Stewart discussed the issue of micro-targeting, gathering and selling data on internet users, and its recent effects on our political process.

They argued that the practices employed during the 2016 election were a dangerous trend that could lead to massive overhaul in our political process. At the very least, they said, there needs to be more accountability by organizations like Google and Facebook that would allow the general public to be more aware of their activities during elections.

Shannon McGregor is a professor specializing in Political Communication at the University of Utah, Travis Ridout is Thomas S. Foley Distinguished Professor of Government and Public Policy at Washington State University, and Emily Stewart is a Vox News reporter who reported extensively on Cambridge Analytica and micro-targeting during the 2016 election

On Tuesday, October 23 Korea Foundation Professor for Korean Social Science at the University of Washington Yong-Chool Ha spoke at the Foley institute about the denuclearization of North Korea and the history of U.S foreign relations with the country through its different regimes to the current day.

Yong explained how North Korea’s isolation and sense of insecurity motivated them to start their nuclear program in 1962 with the help of the Soviet Union. Different strategic attempts to curb North Korea’s program by the Clinton, Bush and Obama administrations were largely unsuccessful. During the Trump administration, with China seemingly more serious about denuclearization and North Korea eager to end sanctions, the 2018 Nuclear Summit in Singapore signaled that China and North Korea might more open to this possibility.

Coffee and Politics: Why they come, illegal immigration to the U.S.

On Monday October 15, Miguel De La Torre spoke at the institute on the historical origins of the current immigration crisis. De La Torre argued that the historic appropriation of Latin American resources through political interventions by the United States had contributed to the current phenomenon of large numbers of Latin American workers entering the United States. He identified the United Fruit Company, NAFTA, and subsidies for big farmers as other factors that contributed to the economic circumstances south of the border that he suggested left few options for many but to try and cross the border.

Although De La Torre argues that certain Latin American countries are actually due some form of recompense for the resource wealth that they have lost, but stated that he would be satisfied just to see more humane treatment of undocumented migrants.

Andersen’s perception of America’s four-hundred year history led him to conclude his view that there is a strong connection to subjective beliefs and feelings over empirical and factual truths. As a result, a delusional set of beliefs have gained sway in the U.S., making Americans appear to hold more extreme views, and believe more fake news than the rest of the Western World. Throughout his lecture, connections between historical, as well as current, examples of extreme religious views, intense individualism, conspiracy theories, and a show business mentality are claimed as contributions to the formation of Fantasyland America. Andersen argues that Americans can still regain their national balance despite a long and recurring history of fantastical thinking, which has led to an imbalance of political polarization.

On Tuesday, October 2, Kenneth Schultz discussed how the divergence between Republicans and Democrats may impact U.S. foreign policy.

He suggested that increasing political polarization has had several effects in the U.S. Declining bipartisan support when employing diplomatic power, inconsistency in commitments to allies and adversaries, as well the concentration of power in the executive branch are widening the party gaps on foreign policy. Noting that Republicans and Democrats are highly divided along ideological lines, he said that there has been an increasing reliance on presidential unilateral powers.

Kenneth Schultz is professor of political science at Stanford University. 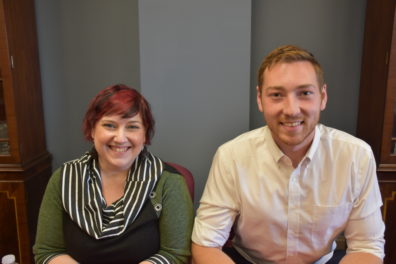 On Wednesday, September 26th, two of the four candidates for Washington’s 9th district, Jennifer Goulet (D) and Matthew Sutherland (D), participated in a candidate town hall meet at the institute, and discussed their proposed platforms if elected.

The candidates, who are challenging incumbents in the district for positions in the state legislature, updated the audience on their priorities if elected, including support for increased access to education, and affordable healthcare.

Coffee and Politics: Polling in the midterms

Elway, the founder and owner of Elway Research Inc., explained a potential shift in the Eastern side of the state from Republican-leaning to Democratic-leaning. His data showed that politics in Washington has become increasingly polarized, with a clear partisan divide between counties on either side of the state, divided by the so-called Cascade Curtain.

He highlighted the fifth, eighth and fourth Congressional District races, which are closer than in recent years, but it was unclear whether this was leading to a “blue wave”. However, demographic changes in the state will likely lead to more redistricting after the next census, with increased numbers of Washingtonians living in the cities, which could lead to a greater divide between the urban and rural parts of the state.

On Monday September 17th Lisa Brown returned to WSU to discuss her campaign for the 5th congressional district. Brown addressed an audience of students, faculty, and community members on the current state of inefficiency in Congress and how she hopes to improve it should she be elected to replace incumbent Representative Cathy McMorris-Rogers.

Following her address, Brown took questions from the audience on topics ranging from ecological protective measures to gun control reform. Brown put particular emphasis on her passion for reforming university funding and confronting the student debt crisis. She cited her experience coming from a lower-income household and the opportunities that a Pell grant afforded her, and noting that such federally funded aid is increasingly hard to come by. Brown finished her talk by urging her supporters to speak on her behalf and participate fully in the electoral process by watching or attending upcoming debates.