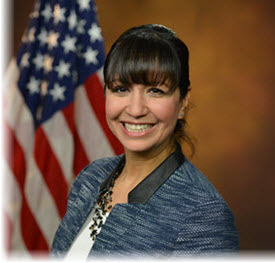 The Foley Institute welcomed director of the National Institute of Justice Nancy Rodriguez back to her alma mater March 28th. Dr. Rodriguez received her Ph.D. from Washington State University in political science and in addition to serving as director of the NIJ, she is on the faculty of Arizona State University’s School of Criminology and Criminal Justice. Presenting for the Distinguished Lecture Series, Dr. Rodriguez spoke on utilizing scientific research for the advancement of criminal justice reform.

Dr. Rodriguez’s academic success provides a resolute means of understanding on how to implement change into the world of criminal justice. With sexual assaults notoriously rampant on college campuses, the director addressed many issues around the tragic trend. “Science is helping us get more effective ways to help victims,” Rodriguez remarked on the need to revolutionize the speed and efficacy of testing rape kits. The Not Alone campaign, Rodriguez explained, combines the resources of government agencies with the meticulous research of the Institute on Domestic Violence and Sexual Assault at University of Texas at Austin.

The work of the campaign “has produced a science-based, victim-centered blueprint for law enforcement to respond to sexual assault cases.” Dr. Rodriguez stressed the importance of building a better relationship between police and the community, especially when training enforcement on sensitivity with victims. The recent climate of racial injustice has incited distrust in law enforcement, and as such, Rodriguez exclaimed the need to “make sure [our role and] our research is relevant.” Potential ways in which to reform the broken relationship between police and the community would only succeed with data in which to understand the perceived distrust. One way, which was discussed through the Q&A portion of the lecture, was by having police departments record the details of assault cases. As of late, only few departments actually keep track of the number and nature of such incidents, and the ones that do so have volunteered.

Despite the current limitations, such efforts to collect data are the stepping stones for reform. “The main mission of NIJ is to develop partnerships and invest in research across disciplines that can strengthen science and advance.” Dr. Rodriguez went on to empower the students in attendance to understand the important role they can play in criminal justice reform. As scholars, the academic and scientific research training is essential to understanding what needs change and why— especially with falling police-community relations and the growing frequency of sexual assault . “You are needed,” the director asserted, “Research is needed.”