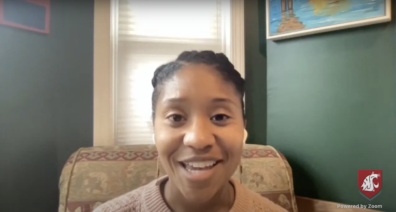 On January 26 Keneshia Grant, of Howard University, discussed how Black migration shapes American politics. Her talk focused on migration patterns and the shifting political affiliations of the Black community throughout time, while noting that the demographic is not a monolith.

Professor Grant explained that the Black vote is important to American politics because, among other things, it provides a pathway for an electoral college victory in presidential races. She then explained the impact of the Great Migration, in which Black Americans left the South in order to find work and pursue a higher quality of life. She stated that during the Great Migration, the Black vote was identified by northern democrats as an important demographic in the 1960’s and remains a key voting block to this day. In conclusion, she noted how the patterns of return migration of Black voters to southern states have especially impacted the politics of conservative states.

This event was cosponsored with the MLK Program. 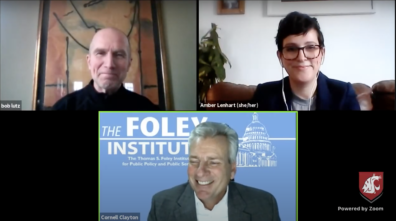 On February 9, Bob Lutz, the medical advisor to the Washington State Department of Health, discussed the public health effort to combat Covid-19. His presentation emphasized how Washington State has responded to the pandemic by using a phased approach.

The challenges the State has faced includes a limited vaccine supply, distribution, communication, and data lags, as well as hindered public health systems. Dr. Lutz enumerated other concerns like systemic racism and discrimination that has evolved into a mistrust of vaccines and the overall public health process.

Amber Lenhart discussed further the equity of the Washington State response by explaining the factors that play into people’s intentions for getting vaccinated. Lenhart further detailed questions people have like knowing how and where to get vaccinated. She explained that if people do not have their basic needs met, such as having a roof over your head, there may not be as much of a priority. In conclusion, a lack of education on this issue in addition to certain groups feeling left out of the conversation impacts the efficient distribution of vaccines.

On February 17, the institute hosted a discussion between El Hadj Djitteye, of the Timbuktu Center for Peace and WSU’s own Peter Chilson. Djitteye discussed the ongoing conflict in the Sahel region and how his studies of American democracy inform his understanding of American current events.

El Hadj Djitteye first talked about his lived experiences in Timbuktu, discussing his time during the 2012 jihadist occupation of the city. He then discussed his perspective on the relationship between democracy and liberty through the lens of American democracy and its enlightenment thinkers. He explained his understanding about the relationship between education, opportunities, and cultural diplomacy in free societies.

For the latter half of the discussion, Professor Chilson asked Djitteye questions submitted by the audience; which included further questions about his understanding of the African Sahel regional conflicts, American institutions, and threats to democracy.

On February 23, Washington’s Secretary of State Kim Wyman led a discussion about election security surrounding the 2020 election. She discussed parallels between the attacks on election integrity articulated by Trump during the presidential election and those by candidate Loren Culp following Washington’s gubernatorial election.

Wyman further discussed Washington’s cybersecurity systems such as the ERIC registration data system and the VoteWA system. ERIC enforces the integrity of voter registration by utilizing data-matching technology of individuals who have changed addresses. Furthermore, the VoteWA system was built for security purposes surrounding voting and elections which is protected by a complex layer of cybersecurity measures to counter foreign interference.

On February 16, Eric Foner of Columbia University delivered the first of a series of Foley Distinguished Lectures on the crisis in constitutional democracy that is currently facing the U.S. He suggested that our society is still working on the process of ending slavery, and that despite being abolished over a century ago, the Reconstruction Era has yet to end. He noted the parallels that exist between that time period and today, such as the violent attack on the Capitol and recent Supreme Court interpretations of the 14th Amendment.

Foner discussed how the ratification of the 13th, 14th, and 15th Amendments were fueled by anti-slavery constitutionalism which separated the concept of citizenship from race. He noted that popular constitutionalism occurred as discussion about what exactly rights and nationality meant in relation to black suffrage. At that time, it was common that people debated concepts of rights and citizenship of African Americans outside of lawmaking such as within churches, public journals, and households.

Foner concluded by discussing how white supremacists overthrew Reconstruction as seen in 1898 in North Carolina and how the next generation dealt with a Jim Crow system that fundamentally undermined the pursuit of a higher quality of life by destroying black education, taking away the right to vote, rigging the labor markets that reserved the best jobs for white people, violent murders, lynching, and racist acts within policing. He pointed out that while Congress attempted to enforce the 13th, 14th, and 15th Amendments, the Supreme Court diluted these protections.