Professor of Political Ecology Richard Boelens examined the relationship of water rights with the cultural and political turmoil. The lecture took place with the additional sponsorship of Eastern Washington University’s College of Social and Behavioral Sciences, Social Work, and the Office of the President. View More

How to Fix Congress

Political Science professors Greg Kroger and Peter Hanson visited WSU to answer the frequently asked question- how do we fix congress? They sat down in front of an audience of students, and explained to them the major issues plaguing congress, and proposed ways to fix them. View More

On Earth Day, environmental activist Alex Steffen discussed some of the issues that we are facing due to climate change. In the world today we facing the ever growing threat of climate change. This could mean that many issues including rising temperatures, lack of biodiversity, and depleted resources all around the world. In terms of carbon emissions and greenhouse gases there is only a certain amount that can be emitted that allows us to maintain a viable world. View More

THE ANTHROPOCENE: CONFRONTING GLOBAL ENVIRONMENTAL CHANGE AND HAZARDOUS WORLDS An interdisciplinary mini-conference gathered presenters from a variety of fields to cover a range of topics with an emphasis on (1) human activity contributing to climate change or environmental risk production or (2) collective efforts that seek to address or adapt to such problems in local, regional, national, and/or international venues. View More

Speaking for the President: The Role of the White House Press Secretary

The most famous political ad ever: The Daily Girl and the 1964 Presidential Campaign

Louisiana State University Professor Robert Mann visited the Thomas S. Foley Institute for Public Policy and Public Service. Professor Mann began by laying the foundation of the 1964 elections, specifically between Barry Goldwater and Lyndon B. Johnson, and discussing the climate of political campaigns during the time period. This led into his discussion of what he describes as the “most famous political ad ever,” more commonly recognized as the daisy girl advertisement. View More

When the Honeymoon Ends: The Romance (and Reality) of Marriage Inequality Litigation

Alison Gash a assistant professor and author from the University of Oregon, spoke about the battle with civil rights and gay marriage. Currently, there are several cases before the Supreme Court that will decide the future of gay marriages around the country. View More

What is Wrong with Congress?

Former Congressmen Charles Djou and David Minge spoke at the Foley Institute about their views on the troubles that Congress as an institution faces. They both discussed numerous issues, such as the severe lack of bipartisanship, as well as the lengthy un-intuitive bills that get passed with hidden agenda… View More

The Rights of Indigenous Peoples in the Contemporary World

The UN Declaration for Indigenous People has been battling an implementation gap, meaning that although the declaration lays out the rights for indigenous people it has not yet been put into effect. View More

Taxing the many to give to the few: How government creates inequality
David Cay Johnston, author and investigative journalist who was awarded the 2001 Pulitzer Prize for reporting on U.S. corporate tax policy spoke at the Fox theater in Spokane and at WSU Pullman. Johnston discussed some of the issues he looked at in his most recent book Divided. View More 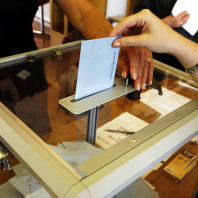 A Public Symposium: Polling & the Pollsters

Discussions were held in in Olympia on the use of opinion polls to measure and shape public attitudes, and how it has become increasingly sophisticated. Politicians, political parties, and interest groups today employ armies of pollsters to shape their messaging, and argue for preferred policies. Joining the discussion was former Director of Surveys CBS News, Kathy Frankovic; President of Elway Research Inc., H. Stuart Elway; Western Washington University Professor, Todd Donovan; Moderator at Tacoma News Tribune, Melissa Santos. View More