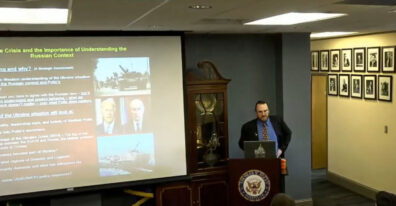 On February 24, the institute welcomed Washington State University’s Tom Preston, C.O. Johnson Distinguished Scholar of Political Science to talk about the situation in Ukraine, as the Russian army was invading.

Preston began his talk by arguing that the media, average Americans, and the intelligence community all have basic misunderstandings of who Putin is and why he is invading Ukraine.

He said that in order to counter Putin’s worldwide influence and help Ukraine, a basic understanding of Vladimir Putin and his motives was needed. Preston noted that Putin has stated that the collapse of the Soviet Union was a tragic event for Russia and its former satellite states, and also that the rapid expansion of NATO post-1997 poses a fundamental threat to the security of Russia.

Ukraine itself is deeply divided on NATO membership and its relationship with Russia. This critical situation became a crisis in 2013, when democratically elected President Viktor Yanukovych opted to enter into a trade deal with Russia which would bring in 15 billion dollars of foreign investment to his nation.

In response, the ‘Orange Revolution’ occurred, Yanukovych was ousted from power, and the trade deal was trapped. This triggered large-scale instability and counter-uprisings in the Eastern part of the country. This led Putin to annex Crimea in 2014.

The current Russian invasion of Ukraine is largely based around the same narrative of NATO incursion. Putin genuinely believes that Ukrainian membership in NATO is dangerous for Russia and desires to replace Ukrainian leadership with a puppet government in order to keep his own regime stable. 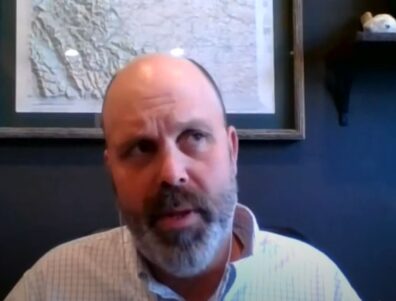 On February 22, Ryan Busse, a former gun industry executive with over twenty years in the field, gave a talk on the decline of self-regulation in the gun industry and how it played a leading role in the radicalization of American politics.

Busse began his talk by highlighting his love of gun sportsmanship and deep belief that responsible gun ownership has fundamental benefits to society. He noted that  when he first entered the gun industry in the late 1990s, there was generally a responsible and healthy adherence to gun ownership standards.

He suggested that this was followed by  a surge of gun-centered political extremism seen in today’s political climate. Busse argued that the heroization of self-defense stories, the spike in conspiracy theories revolving around a mass seizure of firearms, and misuse of open carry laws have all contributed to a toxic fear-driven discussion of the Second Amendment.

He went on to state that a melding of the NRA and gun manufacturers has created a spiral of vote garnering and negative advertising centered upon the almost impossible narrative of a mass gun seizure by the US government.

He concluded by expressing  a glimmer of hope for change, suggesting that responsible gun owners have the power to break away from extremist groups like the NRA and to start their own advocacy groups to create change. 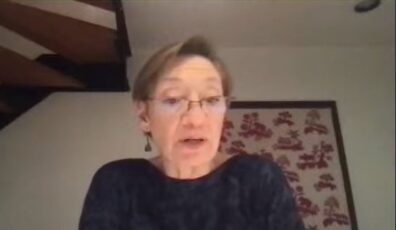 On February 15, Nina Olson, Executive Director of the Center for Taxpayer Rights, spoke at an event cosponsored with the WSU Hoops Institute of Taxation Research & Policy on the subject of taxpayer rights.

Olson began her talk by pointing out the importance of taxation to meet the needs of the population. However, she noted that as part of due process, taxpayers do have a right to be informed and a right to quality service, and that the IRS has lagged behind these standards recently. Olson said that the IRS has not provided timely service to taxpayers and providers, and that COVID served to exacerbate the problem, leading to what Olson predicted would be the worst filing season since 1985.

Olson outlined the process that the IRS goes through during filing season, which involves a lot of manual work, including 13 million math error notices this year, each of which looked at individually by a person. She felt that there should be an automated method of correcting these math error notices so that taxpayers can get their returns in a timely manner.

There is currently an environment of distrust and frustration with the IRS, making it difficult for the IRS to get necessary funding. Olson concluding by suggesting that there must be a balance of power and trust in the tax system, where the use of power serves to build trust in the fairness of the tax system instead of eroding trust by using coercive power.

Nina Olson was the IRS National Taxpayer Advocate for 18 years, and was the principal author of the Taxpayer Bill of Rights, which was adopted by the IRS in 2014, and subsequently became federal law in 2019.