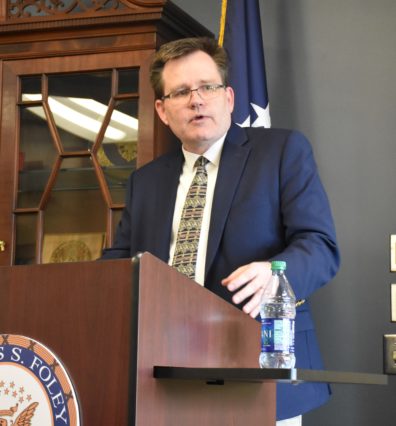 On Thursday April 25, Keith Wittington, award winning author and professor of politics at Princeton University spoke at the Foley Institute about what scenarios qualifies as a constitutional crisis and how the U.S has dealt with them throughout history.

A conversation with Senator Patty Murray: Women in leadership 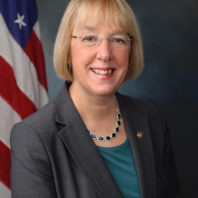 On Tuesday, April 16, Senior Senator Patty Murray discussed her experience as a woman in a leadership role. Senator Murray stated that helping more women take on leadership roles in their communities, country, and all walks of life is something that is very important to her. Senator Murray first sparked an interest in politics at WSU and went on to explain the transition of her life into bipartisan work, such as working with Speaker Paul Ryan. She advised women to speak up, stand up to bullies, and not let fear be a basis for the decisions they make. Before closing with questions, Senator Murray told everyone to use their voice to speak out about issues they care about, because one day it might make a difference. 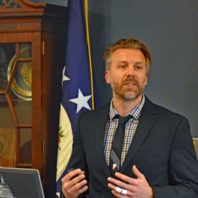 On Tuesday, April 9, Nathan Kalmoe, a professor of political communication at Louisiana State University, spoke about partisanship and the media influence on how it has historically been communicated.

Kalmoe stated that partisanship is promoted through a formula of factors; a large amount of partisans, a small amount of ideologues, following political leaders on issues, and growing animosity towards the media. He said this formula is true for current media, and for newspapers from past historical events. For example, Kalmoe believes the Civil War was started and participated in because of partisanship that displayed by the Republican Party and newspapers. Kalmoe asserted a persons political party is what divides people more than political values and could be more balanced with having a greater amount of ideologues.

Pizza and Politics: When can the ends justify the means?

On Thursday, April 4, Harry Silverstein, an emeritus professor of philosophy at Washington State University spoke about the avoidability conception of responsibility by using the famous philosophical dilemma of ‘Jim and Indians’ as a means to fully explore the conception.

In the dilemma, Jim comes across a scenario where 20 Indians are about to be shot by military forces in a small South American village. The officer gives Jim the option to shoot one Indian in order to spare the others. According to the avoidability conception of responsibility, Jim is the individual most responsible for choosing to let 20 individuals die rather than shooting 1 since the outcome of choosing not to act in this setting in far worse than taking action. One might respond to this, stating that Jim should personally keep his hands from from killing and that only the captain and soldiers are responsible for their actions against the Indians. Silverstein responds to this by stating that the personal ideation to keep on’es own hands clean is morally narcissistic rather than truly virtuous. He also points out that while the soldiers and captain do bear moral responsibility for their actions, this does not exonerate Jim from the consequences of his inaction if he were to allow the Indians to die

Coffee and Politics: Washington and clean energy. A conversation with Governor Jay Inslee.

On Wednesday, April 3, Governor Jay Inslee discussed clean energy in Washington state and the United States as a whole.

Inslee, the current Washington state governor, explained that in the long run, clean energy and strong environmental policy will better mitigate economic strain than if we do nothing to fix it, citing the current massive floods in the Midwest and consistent destructive fires in the Northwest. He also discussed the impact clean energy can have on jobs in all areas of the country, stating “clean energy is not just for elite urban people, it’s for everyone.” Inslee later explained clean energy can not only provide jobs in urban economies but rural economies as well. Before answering audience questions, Inslee closed by saying the needle is getting pushed in the right direction, but we now need policy to help it along.

Public Lecture: The NCAA money race. Can it be stopped?

Zimbalist discussed the many aspects to the crisis within college athletics, focusing on the fact that the median operating deficit for collegiate athletics programs is over $14 million annually. This occurs for many reasons, but perhaps the most important is the fact that athletic programs have no accountability structure. The measure of success is not profits, it is success. Athletic directors stake their careers on generating winning teams and building successful programs, meaning they reinvest the profits into better facilities and coaches in hope of attracting the best recruits. When athletic programs consistently don’t make profits universities are forced to increase student athletic fees, decrease the educational budget, and drop some non-revenue or women’s sports. This becomes a detriment to the academics of major universities. According to Zimbalist, the best way to reform college athletics is to do so through public policy that forces the NCAA to oversee university mandates for student’s academics. He asserted that individual colleges cannot reform the system on their own because they are subject to the systemic forces within the NCAA.

Pat Chun spoke about the incredible role college athletics can play in helping those involved transform into better teammates and better leaders. He argues that the most important thing about Washington State University is its affiliation with the Pac-12 Conference, and that the students and alumni take an immense amount of pride in the continuing success of the athletics program.

Dr. Swanger discussed her role in fostering the relationship between athletics and academics for WSU athletes, particularly in the realm of academic integrity.

Professor Zimbalist began by explaining that while there is a massive funding deficit in college athletics across the country, that number is actually much higher than what is reported. Facilities alone cost roughly $25 million a year to maintain, but many universities report numbers closer to $5 or $10 million. In terms of Washington State, specifically, the ticket sale revenue and corporate sponsorships are about half of those at other Pac-12 universities. Professor Zimbalist believes that this is partially caused by Washington State’s location- Pullman is a small town far away from major cities, with few suburbs and major corporations in the area to attend the games or sponsor them. 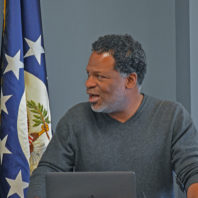 On Tuesday, March 26, Christopher Parker, University of Washington political science professor and author of Change They Can’t Believe In: The Tea Party and Reactionary Politics in America spoke about populism and its implications following the 2016 presidential elections.

Professor Parker presented data on the connection between certain events, such as the Charlottesville riots and Trump’s inauguration, and sudden spikes in google searches for “Trump Populism” and “Trump Nationalism.” This set a foundation to discuss the differences between classical and contemporary populism and their causes. Professor Parker believes the differences between them explains the change in demographics; having America’s first black president, and the increase in diversity within government, juxtaposed by the shift to the Trump presidency. Professor Parker argues that populism is a valid term but needs to be conceptually and empirically contextualized in its use. Unlike classical populism, contemporary populism was not caused by economic anxiety, is not measured properly, and is not inherently tolerant. According to Professor Parker’s research, his main concerns with contemporary populism is that it can catalyze racism and lead to faulty policy prescriptions.

Pizza and Politics: Liberalism and the invention of national security 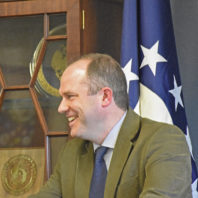 On Monday March 25 Andrew Preston, American history professor and author of American Foreign Relations: A Very Short Introduction spoke about how liberalism in the 20th century was connected to shifting notions of nation security as well as the growth nation security related institutions. 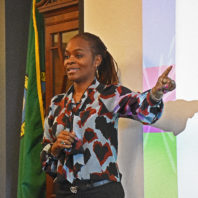 According to Dr. Breland-Noble, culturally relevant mental health care is lacking and causing a disparity between youth of color and their counterparts due to professionals failing to understand unique experiences. The reliance on friends and family members as a source for mental health needs rather than therapists is another disparity disproportionately affecting Black youth. This has led to less professional diagnoses with conditions like depression, and even less youth being treated for such conditions due to non-connections with their therapist. Dr. Breland-Noble leads a community engaged research lab for the AAKOMA project, dedicated to addressing mental health needs for youth of color and implementing culturally relevant, patient centered clinical care. To learn more about the AAKOMA mission and current research regarding the subject click here.

On Tuesday February 19, professor and director of the University of Washington Center for Environmental Politics, Aseem Prakash spoke at the Foley institute about the politics of a carbon tax. The lecture focused on why areas such as Washington and France have rejected carbon related initiatives and how we can effectively move forward towards improving these polices.

Dr. Prakash offered that the way to combat climate change and normalize carbon tax initiatives requires a change in our dialogue and perceptions regarding the issue. He explained there is often a misconception held by the public that carbon taxes serve the elite and punish the average citizen. However, even the revenue positive 2018 carbon tax initiative 1631 failed with voters in both eastern and western Washington. Polling also suggests that climate change is not a very popular issue for voters across the board. He suggests that in order to combat these problems, individuals need to take responsibility for their consumer choices.

On Tuesday, February 19, Aseem Prakash and Jeff Joireman discussed corporate environmentalism, and the incentives corporations have to be environmentally friendly.

Prakash, founding director of the Center for Environmental Politics and professor of political sciences at the University of Washington, explained that corporations have no incentive to go beyond compliance of legally required environmental regulations. His research showed this is caused by a number of factors, such as lack of trust between firms and regulators, and high    costs for both parties.

Joireman, professor of marketing and business at Washington State University, discussed how both corporate social responsibility (CSR) and corporate political advocacy (CPA) offer different avenues for firms to influence public attitudes of their brand. Joireman suggested it is harder for consumers to hold negative attitudes towards firms with similar values to their own, and that CSR/CPA strategies should be further examined as ways to provide incentive for corporations to participate in environmental issues. Both speakers agreed that boycotting, a form of consumer protest that involves withdrawing all relation with a company, and buycotting, a form of incentive for a corporation involving deliberate purchasing of a company’s product to support their policy, in general effectively dents a brand’s image, incentivizing a company to tailor policies to consumer values.

On Thursday, February 7, New York Times bestselling author and psychologist, Michael Gurian, spoke at The Foley Institute about the myths dominating discussions surrounding men and policies in the U.S.

Gurian stated he believes several myths that have continued to hurt men and boys, including traditional masculinity being the cause of male and female distress and policies that help men are aggression’s against equal opportunity for women. He also discussed neurological differences between males and females and the systems that have benefited women due to policies tailored towards these differences. Issues such as lower GPA’s by boys in school, lower college graduation rates, and higher criminal rates of men are a few of the ways Gurian claimed policies are failing boys and men.